Using the Internet As A Tool 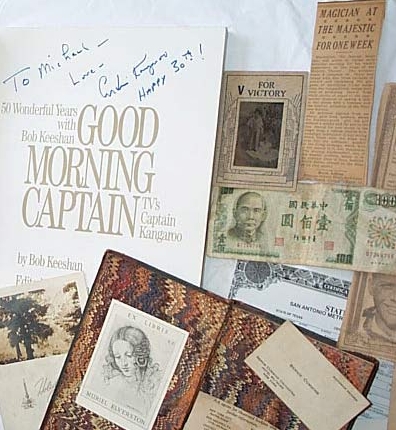 In the beginning, the Internet was a boring place. A place for hobbyists and geeks, and university types, to send text messages amongst themselves. Flash was only known then as a comic book character. Since the introduction of the first web browser in 1990, the Internet has emerged to become the primary selling and informational tool that its founders had never dreamed of. With my background in technology, I have witnessed the Internet transform how we do business, and provide flexible ways of earning a living as well.

As Texas booksellers, we sell many facets of like-new and rare books, including ephemera. Given their subjects, some books are naturally more collectible and interesting than others, with some having heightened interest in the marketplace due to celebrity or other reasons. We typically categorize our books to sell either online or offline. It does help to have a sense of nostalgia in this business, to appreciate a book or paper item for its significance in relation to history and the focused interests of the collector and reader in general. What is viewed as being rare could be a first edition by a noted author, a history book from 1878 with foldout maps, or an early Dick and Jane Reader. It could also be a signed book by the late Bob Keeshan (Captain Kangaroo), a book written by Tim McGraw’s mom, or a White House gate pass from the Eisenhower administration. A lack of availability only adds further to the overall appeal.

Sometimes, it is the ephemera that we find within a book that is more interesting than the book itself. Of course, there are the old photographs, postcards, steamy love letters, family history, an honorable discharge certificate, custom made book marks, report cards, personal inscriptions by the author, the author’s obituary, and even an expired driver’s license. And don’t forget business cards (including one we found for jazz bandleader great Bernie Cummins when he played at the Biltmore Hotel in New York City in the 1920s).