Rosenbach Museum Observes 100th Anniversary of the Sinking of the Titanic 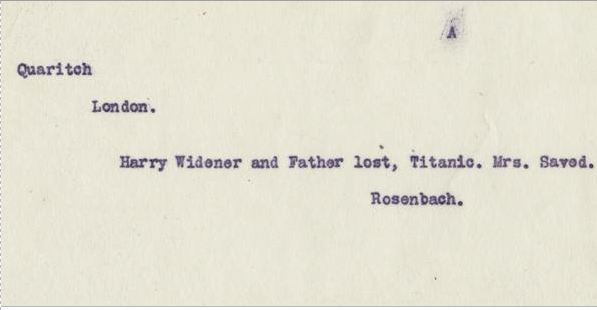 Sometime around Christmas of 1905, young Harry Widener walked into the rooms of the great 20th century bookseller, Dr. A.S.W. Rosenbach. Widener was just a man of 20 at the time, a junior at Harvard. He didn't have a lot of money but his father did, his grandfather still more. His grandfather, Peter Widener, was one of the great 19th century industrialists, perhaps the leading citizen of Philadelphia. He was also a great collector. Art was his specialty, but he had some books too. Similarly, Harry's father, George Widener, collected some books among other things.


Harry, however, was totally smitten by books. After graduation, as he began to gain access to more funding (a doting mother did not hurt), Harry began to collect. He also had a purpose beyond merely possessing books himself. He wanted to found a library with a great collection at his alma mater. Visiting bookshops was one of his missions when he sailed for England in 1912. It was a successful journey, he picked up a few books, and set sail for home. He had a ticket on the Titanic.


From now through June 24, 2012, there will be an exhibition at the Rosenbach Museum and Library in Harry's hometown of Philadelphia entitled, Titanic: The Rise of Rosenbach. Rosenbach was still quite young for a bookseller himself, 29, when the two met in 1905. “The Doctor,” as he was affectionately called, already had connections with some of the biggest names in collecting, but it was more as someone who sold them occasional books. For Harry Widener, Rosenbach was a mentor. He was the man who would help Harry realize his dream of building the world's greatest library for Harvard University.


Those dreams might have have sunk with the Titanic. The collection, and the plans, were still in the making. However, as previously noted, Harry's mother, Eleanor Elkins Widener, adored her son. The loss of her son (and husband) in the Titanic disaster was a tragedy of incomprehensible magnitude for her. Life could never truly be happy again, but at least it could have a purpose. Eleanor Widener had a mission, and that mission was to complete her son's dream. Harvard would have that great library Harry wanted to build, only now, it would be a memorial to him. His mother would build it. Dr. Rosenbach would be the architect of its collection.


The loss of Harry Widener was a great personal tragedy to Dr. Rosenbach. The Doctor was more than just a bookseller to his closest clients. He was a personal friend, one who shared their love of great books. Rosenbach lost both a good friend and his biggest client when the 27-year-old collector lost his life. Nevertheless, the tragedy ended up raising Rosenbach from the level of one of many booksellers to the greatest one of his time. Mrs. Widener would rely on Dr. Rosenbach to choose what books her son would have wanted for his collection, and she was willing to spend whatever it took. As Edwin Wolf's biography, Rosenbach, notes, “There was nothing she wished to do with the vast fortune which had so unhappily come to her except to build her monument in books and marble to Harry's memory. If the prices had been half what she paid, she would have been half as pleased, and would have looked elsewhere for books to buy.” Dr. Rosenbach was the man given the task of spending all that money. It was Mrs. Widener's devotion to memorializing her son that led to the Doctor's rise to the pantheon of booksellers, a reputation unfaded by time 60 years after his death. Ultimately, it also led to the creation of the Rosenbach Museum in his and his brother's memory after they died.

The exhibition at the Rosenbach Museum and Library is timed to coincide with the 100th anniversary of that tragic and eventful disaster, the sinking of the Titanic on April 15, 1912. On April 15, 2012, there will be readings of first-hand accounts of those who experienced, or heard about, the disaster. There will also be a “conversation with the Curator” on the evening of April 5 to further explain the exhibition and answer questions. The remainder of the time through June 24 the exhibition will be open to the public during the museum and library's regular hours. The exhibit examines how Dr. Rosenbach enabled Mrs. Widener to reach her dream of memorializing her son, and how the Widener Library at Harvard in turn ensured the success of Dr. Rosenbach and his firm in the years ahead. Still, the major focus of the exhibition is that terrible day 100 years ago when the unsinkable sank, and the world was never quite the same.


To learn more about this exhibition, click the following link: www.rosenbach.org/learn/exhibitions/titanic