A Close Encounter with Bill McBride, compiler/editor of “A Pocket Guide to the Identification of First Editions” 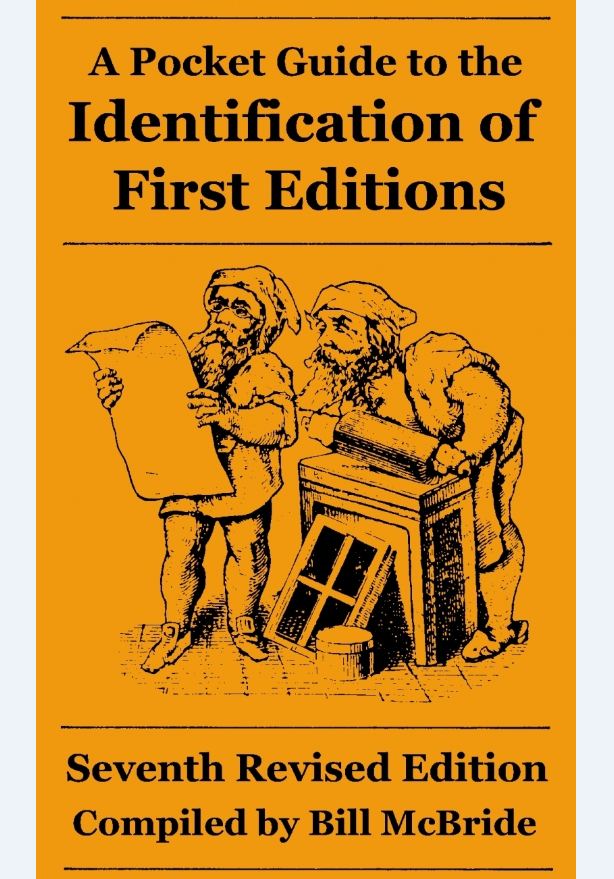 McBride's latest Pocket Guide to the Identification of First Editions.

We recently hired a new employee to enter backlogged books into our catalog. This is the bottleneck that all Web-based booksellers face: we buy like there is no tomorrow, but then the real work of entering books into a database begins. With us, this process can take, well, a very, very long time and results in piles of uncatalogued books. But I digress.


We found a lady who must be near-ideal for the job. She loves to read and has enough experience with computers and the Internet to not need any but the most specific instruction. Her spelling and grammar do not require correction. But, without prior experience in this trade, I had to teach her how to identify first editions, price books based on the market, grade them, and so on. For the essential and primary first edition identification task, there was only one clear choice of tools: McBride’s bright yellow, hand-or-pocket-sized, terse, tried and tested Pocket Guide to the Identification of First Editions, now conveniently re-released in its seventh revised edition.


McBride has been self-publishing his Guide since his first typewritten effort in 1979. A scholar and consumer-oriented crusader by inclination, McBride was not satisfied with the little serious scholarship up until that date, all listed in a bibliography at the back of the book: Ahearn, Boutell, Mathews, Wilson, and Zempel & Verkler are all noted. His first reason for developing the work and publishing it was the “hideously incomplete” nature of the scholarship prior to 1979. But the second reason was the mischief McBride saw in a trade which is not regulated, or self-regulated, if at all: he could readily find books mis-marked as firsts that were clearly not firsts at all. So the publication of the Guide took on a new purpose: “to arm the innocent, “ says McBride, “and correct the professional.”


Since its beginnings in 1979 the number of publishers covered has increased ten-fold: There were 545 publishers in the first guide, twice as many as an earlier effort by a different author. The Guide was originally formatted to fit a #10 envelope. It was typewritten and duplicated by copier. The Guide was somewhat rudimentary; McBride tried to sell it for $5. It was not a big seller although it had, in fact, more information than any other guide on the market.


Shortly thereafter the first Zempel & Verkler came out with “A First Edition?”. We had a good laugh about the title, as this is a question I continue to ask (see my article on Benjamin Franklin’s Autobiography). This book had a fatal flaw: it depended for its information about first editions by querying the publisher. This is fine as a foundation, according to McBride, but not helpful if you are taking a reference book into a store to buy a collectible book.


The essential error occurs because publishers report, if they do report accurately, on what the first edition scheme is at the time the query is made. In order to assure accuracy with the report, the information has to be independently verified in the field. In order to see what the scheme was prior to the query, information also has to be gathered in the field. Every publisher, we know, does its own thing when it comes to identifying a first edition in the book and may very well have used many more schemes in different time periods. Bill could easily be working for the IAEA when it comes to information from publishers: trust, he says, but verify. The end result is a statement of what most likely constitutes a first edition. Like any true scientist, McBride avoids absolutes.


To acquire the initial data, McBride started with input from the publishers, as well as observations in the field — particularly for publishers who no longer exist or have been absorbed by others. If publishers did not answer McBride’s query letters, he was not satisfied to let them slide: he went into the field to check their published works.


What did they do in the previous 50 years? Or in a particular year? He made educated guesses, verified if at all possible: if the scheme remained unchanged over a period, it was likely that it remained consistent in the interim. The constant verification made McBride something of an expert on publishing practices. With all this experience and research he found he could tell almost exactly when a publisher changed from one method to another, down to the month or day. This is particularly critical if one is buying a book that was published during the cusp year.