Borders is Buried, but Kobo Lives On 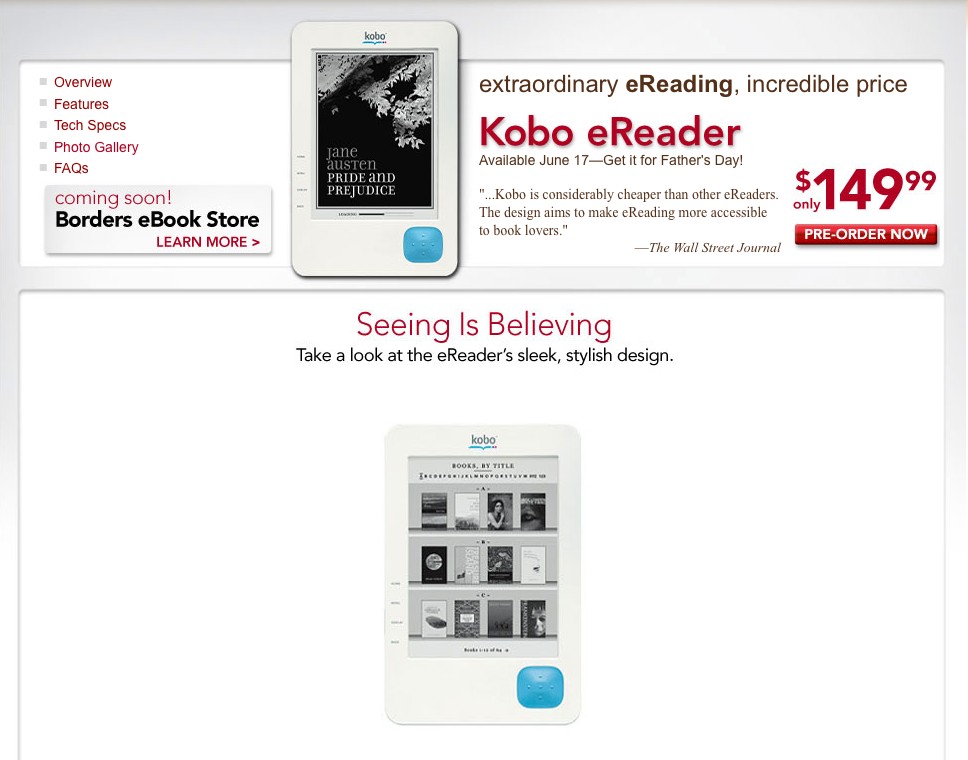 Borders and Kobo were partners in sales in an earlier time.

The final significant steps in the dismemberment and burial of Borders have played out, and we now know how many bones are left to be picked over by creditors. Not many, at least if you are an unsecured creditor. The secured creditors will be paid in full, a lesson for everyone loaning money or selling goods on credit. A security interest provides a seat at the table, while unsecured creditors battle like dogs for the crumbs that are spilled below.


Last February, Borders filed for protection from creditors in bankruptcy court. Borders once had over 1,000 stores in America, and at the time of their filing, was still the second largest bookstore chain in America with 642 stores remaining. After the bankruptcy filing, the firm began paring down their weaker stores as it sought a buyer to take over the company as an ongoing business. It looked like that would happen in July, but creditors were dissatisfied with the offer and voted it down. Instead, they chose to shut Borders down, and liquidate its assets. The 399 stores still remaining in July were all shuttered down by the end of September.


Assets, including various leases and inventory were sold. The Borders name and mailing list was purchased by main rival Barnes & Noble for just under $15 million. More recently, its collection of internet URLs was sold for around three-quarters of a million dollars. Along the way, the sale of secured assets paid out the secured creditors in full. What remained unsure is how much the unsecureds, notably the publishing houses that supplied Borders their books on credit, would get. Now we know.


It isn't pretty. The good news is that it appears they will receive something on the high end of the expected range. The bad news is that this amount was expected to be something between 4 and 10 cents on the dollar. It now looks like the amount will be closer to a dime, but a dime is still a dime, not a dollar.


The last significant piece to go, and which figures to throw a few more pennies to those who are still owed between $812-850 million, is Borders' interest in Kobo. Kobo is the firm that made Borders' electronic readers. E-readers have been the success story of these difficult times for large bookstores. For Amazon, the quite successful online book and general merchant, the Kindle electronic reader has propelled them into the huge electronic tablet area, once the sole domain of Apple and its iPad. For Barnes & Noble, seeming to sink rapidly toward irrelevancy and perhaps the same fate as Borders, its Nook e-reader may prove to be the company's savior.


Borders had no e-reader of its own, nothing substantial enough to save the company. It bought its e-readers from Kobo. Kobo was formed by the Canadian bookseller Indigo. That firm held about a 50% interest in Kobo, having sought out investors to help the company along. One was Borders. Borders purchased a 10% share of the company. That is a relatively small percentage, and Kobo trails well behind Amazon and its Kindle, and Barnes & Noble and its Nook. Nevertheless, it does hold a couple of percentage points of the e-reader market, and while dominant nowhere, apparently has a piece in a lot of markets. It is stronger outside of the U.S. than within. In the end, this 10% share of Kobo was the one asset of at least modest value the bankrupt Borders could sell to provide a few more cents in repayments to its unsecured creditors.


Recently, Rakuten, a large Japanese internet retailer (some like to call it the “Amazon of Japan”), decided to purchase Kobo. They paid around $160 million for Chapters' share of the company. An offer was put in with the bankruptcy court for Borders' share, which the court has approved. Borders will receive something in the $27-$32 million range for its share. That is just a drop in the bucket towards the $850 million it owes, but for the unsecured creditors, it was a drop or nothing. And, for those who knew Borders in its final stages, when it finally got around to offering an e-reader, a piece of what was once a part of Borders will survive. Of course, a small electronic device will hardly fill the memories of those spacious floors and aisles, comfortable chairs, coffee and pastry, and long rows of shelves filled with your favorite new books. Keep pressing the buttons on your e-reader. That other experience is gone forever.