Audubon's Birds of America Takes in $7.9 million at Auction 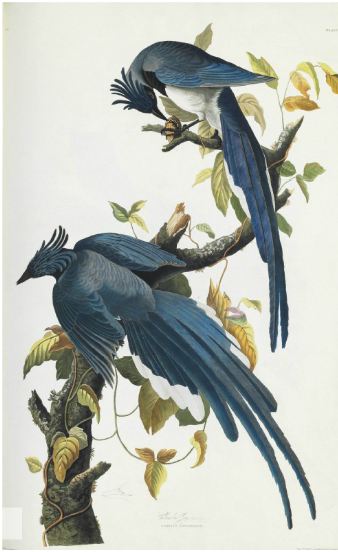 From Audubon's Folio Birds of America. Courtesy of Christie's.

The latest sale of “the most expensive book in the world” was concluded on January 20. At Christie's in New York, a double-elephant folio first edition of John James Audubon's Birds of America, the record holder for the highest price ever achieved for a book at auction, was offered up for bid. When the hammer came down, the final bid rested at $7,922,500. This was not a new record, and some people were expecting we might see one, but the times are not quite conducive to breaking through old ceilings. Nonetheless, it was a respectable enough price for a book in troubled economic times. For comparison, the price was over three times the highest price paid for any book sold at auction in 2011.


The record price for Birds of America, and for any book, remains $11.5 million. That was the price achieved in 2010. The price paid for a copy in 2000 - $8.8 million – also remains higher. However, the price reached last month does exceed that of 2005 when a copy of the Birds sold for $5.6 million. When books are sold for prices in the stratosphere, where only a few people or institutions can even pretend to compete, it all depends on how determined the top two bidders are. It takes two to tango – one to place the winning bid, another to push the price higher before finally throwing in the towel. No one can ever know just how high the winning bidder would have been willing to go, but we can always see how far the runner-up was willing to pursue.


According to Christie's, the winning bidder was an American who placed the bid by telephone. Commenting on the sale, Francis Wahlgren, Christie's  International Head of Books & Manuscripts, noted that this was the third highest price ever reached for a printed book at auction. “This strong result for Audubon’s masterpiece confirms its iconic status and it now holds the top three auction records for printed books,” he noted.


The double-elephant folio edition of Birds of America was produced in installments from 1827-38. Audubon set out to provide accurate drawings of America's bird species, and chose this very large format so that most could be depicted in actual size. The book is not particularly rare, there probably having been around 200 copies produced, 119 complete copies of which are still known to exist. Its value is so great not because of extreme rarity but because it is more a work of art, a collection of masterpieces drawn by Audubon. This particular copy can be traced back to the Fourth Duke of Portland. He was not an original subscriber, so he must have purchased the copy after 1838, but before 1854, when he died.