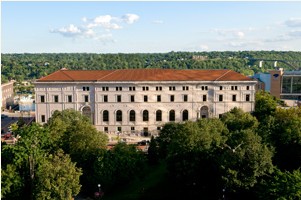 The main branch of the St. Paul Library from which the books were taken.

A love of books is a wonderful thing. It can lead one to knowledge, to an appreciation of all things. Books make us better people. Then there is Amanda Cortright. Her love of books led her down the wrong path. There is a right way to love books, and a wrong way. Ms. Cortright, after a good start, drifted over the line. Her passion turned to obsession, her obsession to crime. Now, her crime has turned to sentencing, and a career in books is laid to ruins.

Amanda Marie Cortright must have always felt a connection to books, for at the age of 18, 13 years ago, she went to work for the St. Paul (Minnesota) Library. That has been her career ever since, until last year, when she was placed under arrest.

Library officials became suspicious of Ms. Cortright a few years ago, and began monitoring her activities. What they discovered was through her access to library computers, she had created several fictitious customer accounts. These fictitious persons would check out books, after which, Ms. Cortright would delete the records of items borrowed. She evidently became adept at this process, as by the time officials were able to put together a case against her, she had removed around 1,400 books, DVDs, and magazines from the library.

These were not particularly valuable items she was taking, though even cheap things can add up when you take 1,400 of them. The library estimated the value at just under $38,000. Among the items taken were DVDs of television shows, copies of the magazines Good Housekeeping and Vanity Fair, and copies of Berenstain Bears books. I can understand the temptations of an Alice in Wonderland or Wizard of Oz, Winnie-the-Pooh or something by Dr. Seuss, but entering a life of crime for the Berenstain Bears? That is incomprehensible. She could have won this case with an insanity plea.

However, Ms. Cortright took full responsibility for her behavior. She pled guilty this past April, a year after the charges were filed. Fortunately, police were able to find all of the material known to have been taken from the library in her home. Ms. Cortright also was found to have sold almost 600 books to a used book store going back to 2004, but none of those books was traced to the St. Paul Library. Since the library books were returned, she was not charged for their value (nor any overdue book fines either), although she must reimburse the library $11,585 for documenting the missing items and restoring them to the shelves. The defendant's attorney asked for simple probation, but Ramsey County Judge Judith Tilsen felt that $38,000 worth of theft warranted time in prison. So, she compromised, sentencing Ms. Cortright to 30 days of home confinement under electronic monitoring, 10 years of probation, and 200 hours of community service. On successful completion of probation, the crime will be downgraded from a felony to a misdemeanor.

According to the St. Paul Star Tribune, Judge Tilsen did leave us with some words of wisdom:  "Books are incredibly valuable assets." The "incredibly" might be a bit of hyperbole in this day and age, and even the "valuable" part doesn't seem to apply to the books Ms. Cortright pilfered. Nonetheless, it is always good to hear someone defending the value of books, especially when that defense comes with the backing of law. Judgment has been rendered. Books are incredibly valuable assets. Case closed.