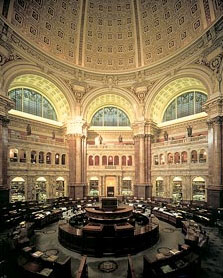 I’ve stood awestruck in the Library of Congress.

Harwich Port, Cape Cod. Yesterday, I was speaking on the telephone with a very charming customer from the U.K. and he asked me if I remembered a movie about a bookseller who engaged in a lengthy, complex and very passionate long-distance relationship with a New York bibliophile. The movie, of course, was “84 Charing Cross Road”, with Anthony Hopkins and Anne Bancroft playing the ill-starred lovers, whose paths were, sadly, never to cross in “real life”.

Recalling the movie got me thinking about the nature of this business, of the ways in which we relate to our suppliers and client-customers, and (by no means least importantly) of the way we go about acquiring valuable stock. We understand (or ought to) the importance of a continuing relationship with our customers but, frankly, it is difficult to feel the same warm, fuzzy thoughts about our suppliers — after all, we need to take advantage of them in order to make a profit. I have personally been on the receiving end of an attempted-but-failed transaction where a bookseller told me with a perfectly straight face that my 10,000-some-odd collection of books on Comparative Mediaeval Literature was worth about $400.

The first time I even thought about books as inventory was after I was laid off from an executive position in the hi-tech biz. My severance pay and unemployment insurance were running out rapidly, and I knew that I had to generate some income quickly. Happily I discovered that being middle-aged, multi-lingual and well-educated, while detrimental to my prospects in the brave new world of low-paying, globalized McJobs, was a real plus in the world of books.

So the question was, how might I go about acquiring books to sell? What kind of books would I sell? And how could I make this happen quickly and profitably enough to keep my mortgage out of default? To complicate the matter, I was also kind of at odds with myself: my instinct to buy at the lowest possible price in order to make the most money was butting heads with my gut feeling that the best long-term plan was to develop mutually beneficial partnerships, as it is in other businesses. In the beginning I sidestepped this issue quite adroitly by simply not buying from others. I culled my start-up inventory from my collections of thousands of books. I realized that I owned many books that I simply was not attached to, had no intention of rereading, and did not need for my scholarly work. The key was evaluating them properly and then pricing them to sell.