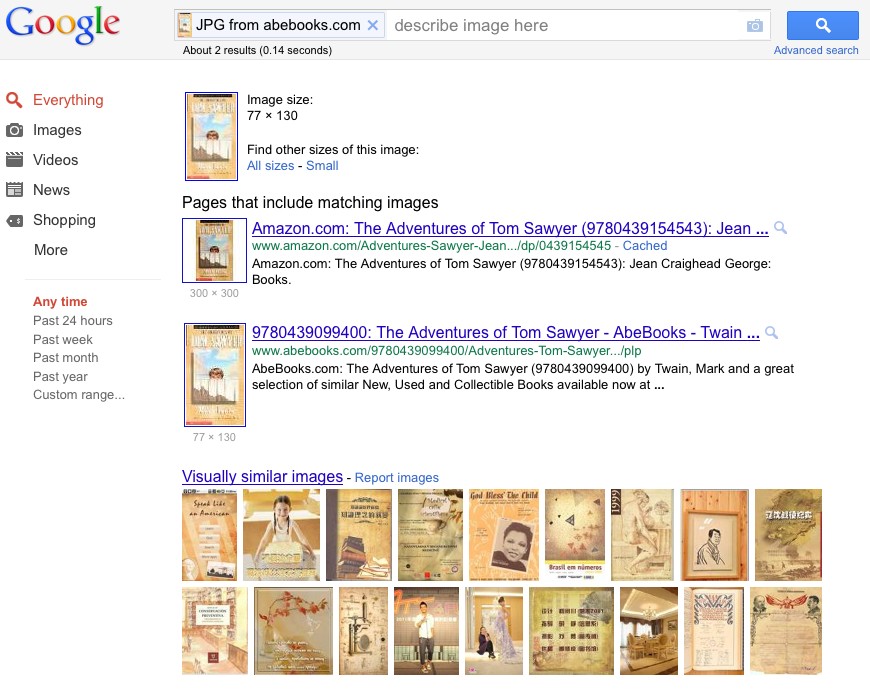 Searching image of Tom Sawyer cover found some exact matches, and other images with similar tones.

In testing the service, I found that Google was quite good at finding identical images, and then displaying other sites with the same picture. This can be useful for finding additional information about a person or place, or even identifying him/her/it if you don't know. I was impressed with Google's ability to identify the name of a person in a photograph, presuming at least some level of notoriety. I placed a picture of the seldom photographed, somewhat obscure heiress Huguette Clark, who died a few weeks back, and Google not only found additional pictures, but informed me their "Best guess for this image" was Huguette Clark. Good "guess."

Google didn't do so well with images uploaded from my personal collection. I'm not a celebrity, nor is anyone else in my photo album, but I thought Google might find people with some resemblance, and maybe even match a photo from a social site like Facebook. Instead, it matched me up primarily with a group of young, Asian women. I am none of those. The only old geezer to come up didn't look at all like me, or at least I hope not. What did match closer were the colors and tones in the background. Evidently, young Asian women and I share the same taste in backgrounds. An old black and white photograph matched only other black and white photographs. While Google seems able to match identical photographs, and perhaps find additional pictures of a person and even that individual's name from the match, it was not good at finding matches to someone or thing based on a photograph of the same from a different angle, or with a different expression. That said, adding a name to a picture did find some correct matches, even though the name, while not particularly common, is not unique either.

For those in the book world, you can search an image of a book cover. Google will likely find other images of that book if they are identical. Beyond that, it generally found other images that were alike only in that they had similar color tones.