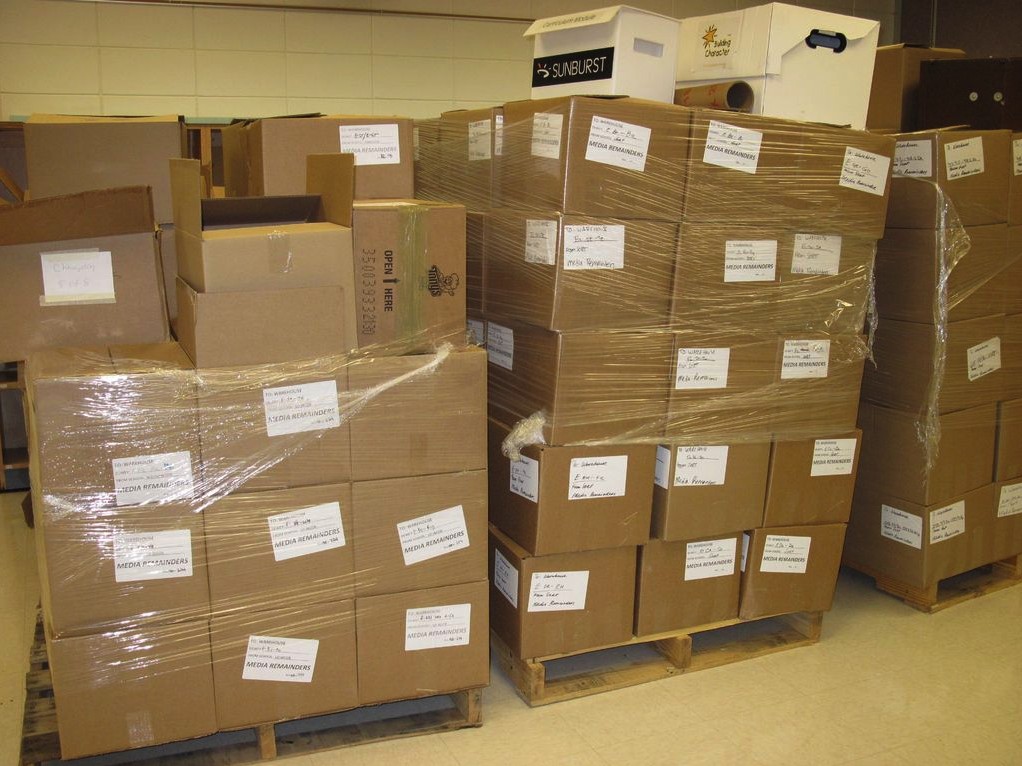 Boxes of books offered for sale by the Anoka-Hennepin School District.

A book auction was held recently in Minnesota, and a most atypical one at that. The starting bids were exceptionally low, though perhaps not for the rather ordinary material offered.  Books were priced at a minimum of $5 per box, with the contents a mystery. All that was promised was that each box would contain 12-30 books. Their general topics were written on the outside of the boxes, discernable because the books inside were arranged consecutively by Dewey Decimal System numbers. Bidders could not, however, open a box and rifle through the contents, nor even bid on specific boxes. Bidding was simply for some stated quantity of boxes. However, winning bidders could look at the notations on the outside when they came around to pick up their winning bids, and thereby select a topic.

The auction is perhaps a sign of the times, the difficult economy, combined with declining enrollment in schools in the Anoka-Hennepin Independent School District. This district in the suburbs north of Minneapolis and St. Paul is the state's largest school district. At one time, it experienced rapid growth. Now, it is declining, and the district has responded by closing some schools. The district may lose one more resident next year if favorite daughter, and Anoka High graduate, Michele Bachmann becomes America's next president.

When the district closed down six elementary schools, it found itself with an excess of property, including a couple of buildings, lots of furniture, and around 17,000 library books. What do you do with 17,000 books from elementary school libraries? A larger number of more desirable books was moved to other schools, but there were far more books than room in the remaining libraries. So, the Anoka-Hennepin District put them up for auction. These not being valuable titles, the district had no hope of selling them one at a time. Instead, it put them in boxes, perhaps somewhat haphazardly, roughly by shelf order, and as many as could fit in a box. Differences in book size would account for different quantities of books per box. Approximately 800 boxes were offered for sale.

Naturally, the district hoped to make some money on these sales, but the reality is they most needed to find a way to dispose of the books. If every one of the boxes received a $5 bid, that would still only amount to $4,000, hardly a drop in the bucket for a large school district. That is less than 25 cents per book, and undoubtedly the cost was many times that amount. Obviously, this book auction was not going to Sotheby's or Christie's.

Instead, the auction was posted on the Public Service auction website. Bidding began on June 14, with a two-week window. Ten days into the auction, the school district was still awaiting its first bid. Perhaps there were snipers waiting to enter their bid at the last second? Maybe. The auction came to a close on June 28, and fortunately, there were sufficient last-minute bids to win all 800 boxes. The bidding was essentially all at the minimum $5 per box (the high bid was $5.50), but the sale brought in $4,000 to the schools' coffers, and perhaps more importantly, took those 800 boxes of books off of their hands.