No Borders:  Pioneer Bookseller Closes Down on Both Sides of the Pacific 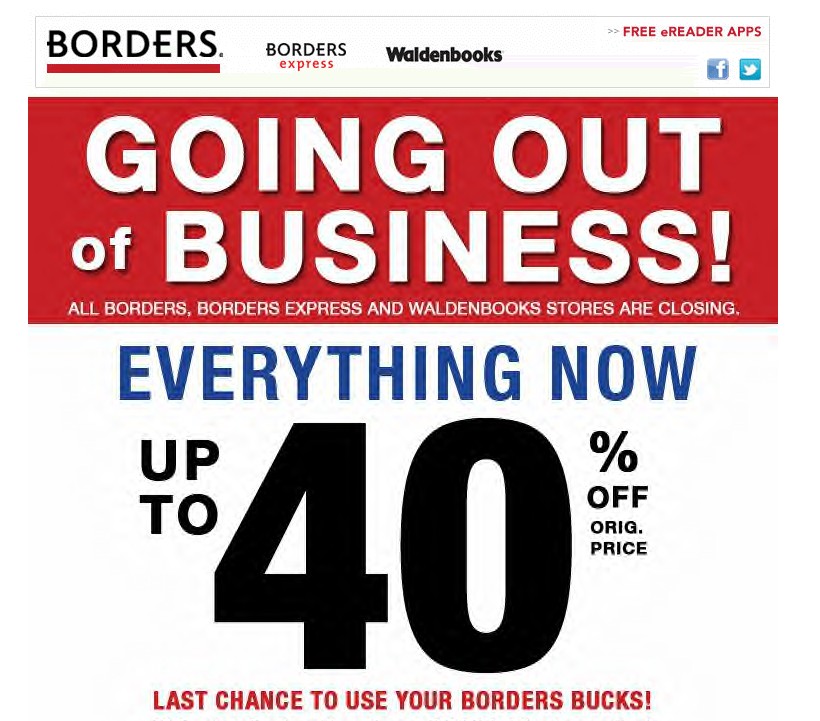 Going out of business.

Borders is no more. The once great bookseller, begun as a small local bookshop in Ann Arbor, Michigan, 40 years ago, is closing all of its stores. The firm's President, Mike Edwards, issued a statement saying, "We were all working hard towards a different outcome, but the headwinds we have been facing for quite some time, including the rapidly changing book industry, eReader revolution, and turbulent economy, have brought us to where we are now."

Founded by University of Michigan students Tom and Louis Borders in 1971, Borders grew slowly during the first half of its life. Then, in 1992, the Borders brothers sold their successful but relatively small chain to K-Mart. K-Mart was still a powerhouse competitor to Wal-Mart back then. At the time, Borders had just 21 stores. Under K-Mart's tutelage, Borders rapidly expanded. K-Mart merged Borders with its Waldenbooks unit, the major mall bookstore at the time, but K-Mart was struggling with a myriad of its own problems in the 1990s. The large discounter decided to spin off Borders in a public offering in 1995 to focus on its own issues.

Borders was on the cutting edge of the latest form of bookselling in 1995, one that it had pioneered - large stores with comfortable chairs, coffee and pastries, a place for people to gather, read, talk, eat, and, hopefully, buy some books. Growth continued, more stores were opened, and other items, noticeably music, were added. Customers loved the place. Eventually, the Borders Group operated over 1,000 stores.

Unfortunately, as the bookseller entered its fourth decade, the book market began to change from under it. Notably, online selling, particularly in the form of Amazon, started eating into its business. Borders did not adjust. It took ages to develop its own online business, by which point it was hopelessly behind. Borders last made a profit in 2006. As losses mounted, the firm was forced to take on high interest loans to proceed, which only further weakened its financial stability. Then, electronic readers came along, a huge boon to Amazon's business, but Borders was again way, way late to the party. After years of trying to find a buyer, Borders was forced to seek bankruptcy protection in February.

At first, it appeared Borders might have a savior. Direct Brands, owner of Columbia House, made an offer with an intention to keep the book chain going. However, controlling creditors did not believe this was their best deal. Instead, they let the bankruptcy proceedings proceed towards an auction, which was cancelled at the last minute when it became apparent there would be no bids beyond that of a liquidator. Instead, the remaining roughly 400 Borders stores, inventory, furnishings, and whatever else it has, will be liquidated. Over 10,000 people will lose their jobs. It is estimated the final stores will shut down in September.

For those who have purchased one of Borders late-arriving e-Readers, there is no concern about the manufacturer going out of business. They were made by Kobo, and while this company's investors included Borders, it is a separate entity, free from Borders unresolvable financial problems.

Borders run was like a shooting star. Once it took off, it shined brightly for a couple of decades. It was a major force in moving bookselling from small, crowded, often independent stores to large, roomy book salons. It was a format that became immensely popular in the 1990s. As Mr. Williams noted in his statement, "For decades, Borders stores have been destinations within our communities, places where people have sought knowledge, entertainment, and enlightenment and connected with others who share their passion." With the advent of the internet, people learned to buy, connect, socialize, entertain themselves, and share their passions in front of a computer screen. Borders was no longer necessary. Bookselling may struggle these days, but it survives. Borders does not.

The situation is no better for Borders in Australia. The Borders brand in Australia is not owned by Borders. It is owned by REDgroup, the largest book retailer in the country. Nevertheless, the results are the same. Borders Australia went into "administration" (like a bankruptcy filing) in February, and announced in June that all of its remaining stores (nine) in the country would close down in July. No buyer could be found to keep them going.

Meanwhile, Australia's largest book chain, Angus & Robertson, also owned by REDgroup, is closing 42 of its stores. Layoffs are expected to exceed 500. There are 48 Angus & Robertson stores operated by franchisees, and these are expected to remain open. Nineteen other non-franchise stores may remain open pending talks to sell them. The online businesses of Angus & Robertson and Borders were sold to Pearson Australia Group and will also continue in business. For REDgroup, whose stated vision was "to be the number one retailer of books, stationery and entertainment in the markets in which we operate," and which briefly achieved that goal for books, these transactions mark the end of the line.

For those who cannot bear life without Borders, a few scattered stores may continue to survive the U.S.closings, though their long term prognosis remains clouded. There are two Borders in Singapore, and reportedly, those stores have been financially profitable. Though, like the closed Australian stores, they are owned by bankrupt REDgroup, they continue to operate with no indication of closing. Whether they will be able to continue indefinitely, and if so, retain the Borders name, is not known.