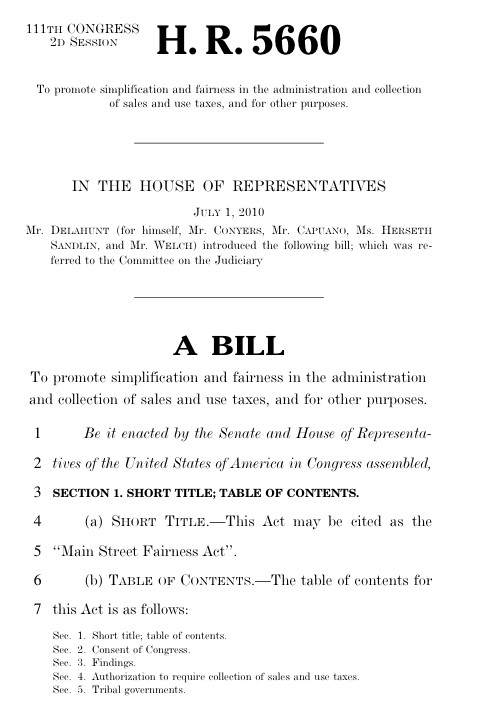 The Main Street Fairness Act has been endorsed by the ABA.

Since many ABA bookstores also have websites, we asked Mr. Teicher whether they supported the ABA position. He responded, "I would guess that nearly all of our members strongly support sales tax fairness, which just shows what kind of impact sales tax inequity has had on independent bookstores over the years. Literally hundreds of ABA member booksellers have been actively engaged in this fight, some by simply communicating with their legislators, but many by actually testifying before legislative committees. Our members collect and remit sales tax in states where they have nexus already, so this issue for them is a no-brainer. It's all about leveling the playing field."

Mr. Teicher expressed the belief that many people are unaware that they are supposed to pay a sales/use tax when they purchase from a merchant like Amazon. "We know for a fact that many people do not understand that, when you purchase a product out-of-state that you owe use tax on it, so they believe they're buying duty-free. As online shopping has grown, this has further eroded sales at bricks-and-mortar stores. I believe that a significantly growing portion of online shoppers are buying online because they either do not understand use tax laws or know they are hard to enforce."

As to how great the loss is to "Main Street," Mr. Teicher was unaware of any specific studies, but pointed out, "Anecdotally, we hear from booksellers, and indeed from retailers in other markets, that people will enter their stores to find out about the next greatest book or item, and then declare that they will go and buy it online to avoid paying sales tax, sometime even using their smart phones to make the purchase in the aisle of the bricks-and-mortar store." He noted statistics showing the rapid increase in online sales as evidence of sales being lost by local retailers. Mr. Teicher also pointed to Amazon's desire to overturn California's remote sales tax law as "yet another indication as to how important that sales tax advantage over in-state retailers really is."

Finally, we inquired as to what legal strategy was most likely to help the ABA members' cause. Mr. Teicher responded that they have always felt that a federal solution, such as the Main Street Fairness Act, would be the best way to resolve the issue, but "it has been difficult to generate sufficient support in Congress." However, he also considers the current definition of  "nexus" sufficient for states to require sales tax collection by out-of-state retailers. He believes such things as warehouses, offices of affiliated companies, and online affiliates ("by anyone's definition that's a sales agent") are clearly examples of nexus. Clarifying state laws, or federal acts are welcome, but Mr. Teicher believes the law already supports the ABA's side of the argument.

Mr. Teicher concluded, "This has been a long and protracted fight, but we are making progress. Legislation has been passed in more states, and editorials calling for sales tax equity have appeared in dozens of newspapers across the country, including in Amazon's own hometown, The Seattle Times."