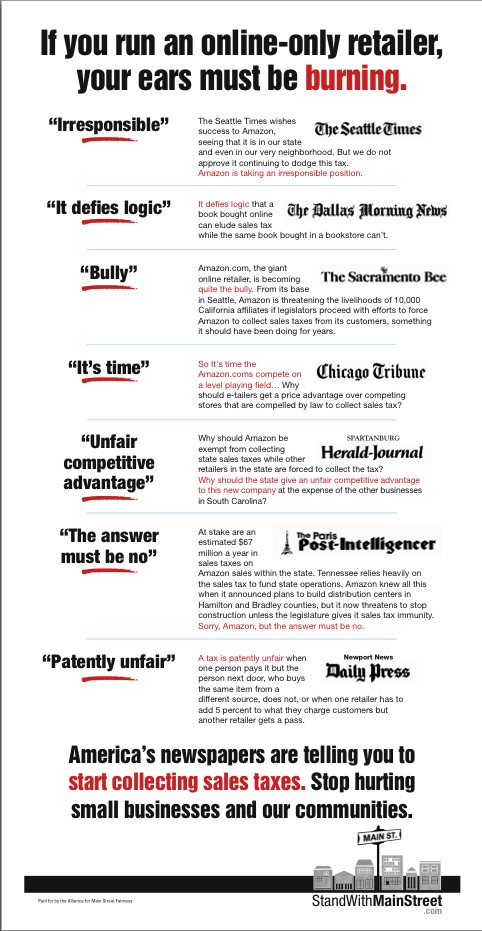 An ad from the Alliance for Main Street Fairness (which includes the ABA).

In June, we reported on a major sales tax battle taking place in the hinterlands between the world's largest online bookseller, Amazon.com, and various American states. The ABA (American Booksellers Association) has weighed in heavily on this issue, and it strongly opposes the position taken by Amazon. The ABA is an association of independent, storefront booksellers founded in 1900. The issue is whether Amazon, and other online retailers, should be required to collect sales tax in states where they do not have a physical presence. This is no small issue, with estimates well into the billions annually said to be at stake. On one side are revenue-starved states and bricks and mortar retailers, ranging from small independents such as those represented by the ABA, to large chains like Wal-Mart and Target; on the other are online retailers such as Amazon and Overstock.com and some anti-tax groups.

We all know the issue. When you buy at a store, you pay your state and local sales tax (if there is one). When you buy online, unless that online retailer has a store or some physical presence in your state, you do not. Naturally, local retailers see that as a competitive disadvantage. They have to charge more to cover the tax, encouraging consumers to buy from the out of state online retailer instead. They want a "level playing field," that is, they want online retailers to be compelled to collect local sales taxes just as they must do.

Electronic retailers object to having to collect sales tax primarily on the grounds of complexity. Forty-five states impose sales taxes, each at its own rate. But that is not all. Hundreds of municipalities also charge sales taxes at varying rates. Then, add to that each state has its own list of items that are and are not subject to sales tax. The permutations are in the thousands.  The online retailer must compute and charge the correct amount on those items subject to tax for each jurisdiction and then make payments to at least 45 separate taxing authorities. Meanwhile, the local store charges just one rate on one set of taxable items.

States have long wanted mail order (and now online) retailers to collect their sales taxes. For them, it's a revenue, rather than a fairness issue. However, the Supreme Court has struck down state attempts to force out-of-state retailers to collect taxes on the grounds that the task of collecting varying sales taxes puts an unacceptable burden on interstate commerce, constitutionally the purview of the federal government. So, years ago, it said that an out-of-state retailer could only be compelled to collect a state's sales tax if it had a "nexus" with that state. "Nexus" has generally been considered some sort of physical presence within the state, such as a store. That is why a Wal-Mart online will charge you sales tax but Amazon won't. Wal-Mart has a store in your state; Amazon does not.

In 1992, the Supreme Court (in the Quill case) modified its earlier decision to open one more option for states to collect sales tax. Since interstate commerce is a federal responsibility, the Court said that the federal government could compel internet retailers to collect state sales taxes, even if the states themselves could not. So far, the federal government has declined this invitation.

For years, this issue stayed on the backburner, politicians loathe to push for taxing internet purchases as taxes are not popular with the public. "Main Street" may have felt it was treated unfairly, but consumers are glad for any break they can get. However, with the recent severe recession, coupled with decreasing federal aid, states have been desperate to find new sources of revenue. They are looking at these billions of dollars in lost sales tax revenue and trying to find a way to collect them.

The most obvious answer, short of convincing Congress to help, is to uncover innovative ways of finding "nexus" between the internet company and their state. Warehouses, and local "agents," have topped the list of new forms of claimed "nexus."

Enter Amazon. No one is a bigger online retailer, and no one has objected more strenuously to efforts to require the collection of sales taxes on internet purchases. Amazon plays hardball. Amazon, through a separate corporation, controlled a warehouse in Texas, opened to reduce shipping costs. After a couple of years, Texas yelled "nexus" and sent Amazon a bill. Amazon shuttered its Texas warehouse and laid off its local employees. Nexus no more. Amazon demanded the Governor of Tennessee agree not to deem warehouses to be a "nexus" as a precondition to opening one in that state.