Billy I kid you not 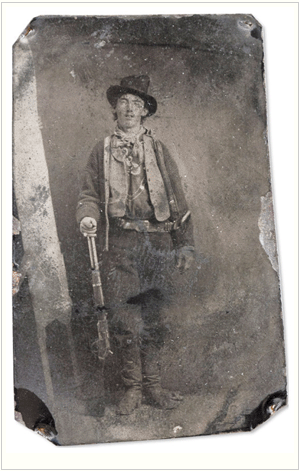 Pictures are sometimes worth more than a thousand words

You can imagine why William became a gunfighter.  He apparently didn’t like his original name, William Henry McCarty, and took as its replacement a worse one:  William H. Bonney.  Having then demonstrated his sensitivity to how he was addressed he subsequently and possibly because of the name change, became skilled at defending himself.  “Hey Bonnie” if said in the wrong way could in some circles be construed as fighting words and he was not a good man to cross.  Being a native New Yorker he knew how to protect himself.  Lucky for New York he moved west.  Unluckily for New Mexico he brought his New York manners with him.


At age fifteen he was arrested for theft in the New Mexico territory and then escaped to Arizona where he is credited with his first killing.  This would be the first of many during his short life that ended 132 days short of 22.  During his span he would become an angel of death or folk hero depending on who told his story.  He is said to have killed anywhere from four to twenty-one.  His willingness to kill earned him the sobriquet “Billy the Kid,” apparently for his precocious ability.  His motivation for mayhem continues to be debated today.  And because so little is known about him he is mostly a blank slate colored by later perspectives and agendas.


When Bonney was eighteen he became involved in the Lincoln County War in New Mexico [1878-1879], a violent struggle between cattle ranchers and merchants.  Fighting on behalf of ranchers he killed two law enforcement officials and became the object of judicial inquiry culminating in a brief trial, a subsequent guilty verdict and sentence to hang.  Being resourceful he contrived an escape, overpowering his jailers and killing one in the process.


At this point he had wrought sufficient carnage to be deemed colorful and became the subject of competing publicity campaigns that portrayed him as either a grimy serial killer or folk hero.  This publicity was probably the death of him for soon after embarrassed law enforcement officials sought to retake the high ground by exterminating him.  So much for the saying that all publicity is good publicity.  The end came simply enough.  He was tracked to a rural shack, surrounded and executed.