Death of Eccentric, 104-Year-Old Lady Leads to a Museum for her Art and Books 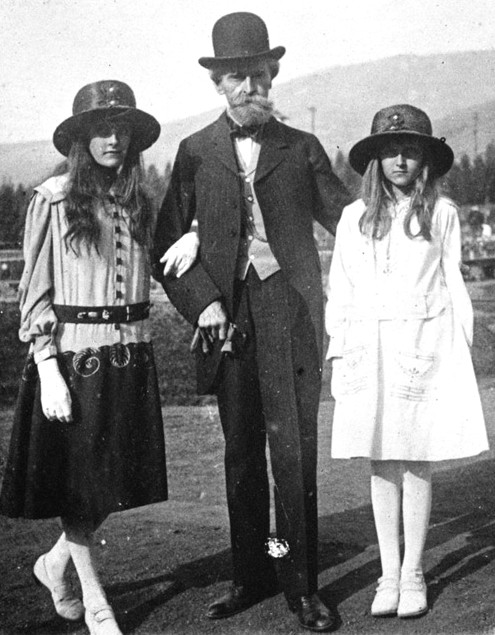 Huguette Clark (right) at age 11 in Montana, with father and sister Andrée.

A 21,000 square-foot mansion in Santa Barbara, California, will one day be the home of a fabulous museum, including art and books from an old and spectacular personal collection. Not much is known about the collection, especially the books, though a first edition of Paradise Lost is said to be part of the library. It seems to be more oriented to visual art, but the owner was the half-sister of William Andrews Clark, Jr., whose books were bequeathed to the William Andrews Clark Memorial Library at the University of California Los Angeles when he died in 1934. It is one of the more important rare book libraries in the country.

This magnificent gift is filled with intrigue, a bit of Howard Hughes combined with a person connected to times very long ago. The mansion and collection are the gifts of Huguette Marcelle Clark, a 104-year-old woman who, like Howard Hughes, disappeared from public view many decades ago. She died in May, just two weeks short of her 105th birthday.

This story goes well back into the 19th century. Ms. Clark's father, William Andrews Clark, was born in 1839. Is there anyone else still alive whose father was born in 1839? Probably not. Two generations spanning 172 years. William Clark was a clever man. Born in Pennsylvania, he moved west to the Montana Territory, where he became one of Butte's legendary "copper kings." By the 1880s, he was an extraordinarily wealthy man, with business interests extending far beyond mining. By the turn of the century, he was one of the richest men in America, with wealth equivalent to something like $3 billion today. It was Clark who established Las Vegas, as a stop for his railroad (Clark County is named for him).

Clark developed friends, enemies, and sycophants along the way. Some saw him as unscrupulous. Mark Twain has been quoted as saying of Clark, "He is as rotten a human being as can be found anywhere under the flag; he is a shame to the American nation, and no one has helped to send him to the Senate who did not know that his proper place was the penitentiary, with a ball and chain on his legs."  Twain apparently didn't care much for him. The reference to the senate came from Clark's desire to be a senator in the days when U.S. senators were appointed by the state legislature. Clark simply bribed his way to the appointment. As he later was said to have quite accurately pointed out, "I never bought a man who wasn’t for sale." It was reputedly at least partly because of Clark that the 17th Amendment, providing for direct election of senators, was passed. The Senate refused to seat Clark, but he later would be successfully selected to a term in the Senate in 1901.

Clark was married twice. He and his first wife had five children. In fact, the late Huguette Clark actually had a sibling who died in the 19th century. Mr. Clark's first wife died in 1893, and he later married Anna La Chapelle, 39 years his junior. She had two daughters, Andrée, born in 1902, and Huguette, born in 1906, when her father was 67 years old. Mr. Clark built himself and his family a 121-room (including 31 bathrooms) mansion on Fifth Avenue in New York, where he lived until he died in 1925.

Undoubtedly, Huguette did not have a typical childhood, though it seems to have been a pleasant one. She probably never bonded much with her father's first family, but was close to her mother and full sister, Andrée. Andrée died in 1919 at the age of 16, and this tragic event may partly explain the reclusiveness Huguette developed as the years wore on. Huguette did get married once, but it didn't last. In 1928, she married a man who had worked for her father. She claimed desertion, a 1940 book asserted the marriage was never consummated. By 1930, she was divorced, shy, and never to be married again.


She then moved in with her mother, sharing a "smaller," 42-room apartment in New York. It would be her official residence for the remainder of her life. There are no known photographs taken of Huguette Clark after 1930.