Barnes & Noble Receives a Takeover Offer, and the Reason May Surprise You 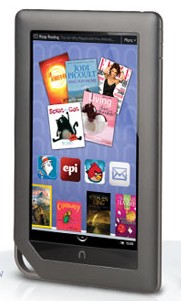 Barnes & Noble got out fast with its color Nook.

America's largest chain of bookstores received a major, and perhaps surprisingly strong purchase offer recently. Liberty Media, owner of large shares of Sirius Satellite Radio and QVC Shopping Network among others, made an offer to buy 70% of Barnes & Noble in a deal that values the company at $1 billion. Some had questioned whether the leading bricks and mortar chain could survive at all competing against Amazon.com and others in this quickly evolving world of internet sales and electronic readers. The printed book, as opposed to the digital one, is under enormous pressure, and many believe that though it may not disappear altogether, it will become a comparatively small and shrinking part of the book business. That's not a great prospect for a chain of stores with millions of printed books on their shelves.

The $1 billion offer, a 20% premium over Barnes & Noble's stock price at the time, may seem particularly surprising given their main bricks and mortar rival, Borders, recently filed for bankruptcy. Borders filed earlier this year, and continues to show substantial losses. On the other hand, Barnes & Noble actually saw sales increase at its stores during the first quarter of the year, the first time that has happened since 2007. Does Liberty believe there still is life in their business model? Despite what their offer might seem to imply, this is not so clear at all. Some analysts believe the offer has more to do with a hope on Liberty's part about where Barnes & Noble might go, as opposed to where it has been.

Several commentators have speculated that Liberty's offer has little to do with Barnes & Noble's stores, and everything to do with its Nook electronic reader and its online digital bookstore. While Amazon with its Kindle e-reader reportedly controls around 65% of the market, Barnes & Noble has made substantial inroads with its Nook competitor. Reports indicate the Nook now holds around 25% of the market, a good and growing share of what appears to be a rapidly expanding market.

While at first seeming to be hopelessly behind, B&N made some smart moves with its Nook to gain substantial market share. It enabled the Nook to obtain electronic books from everywhere. Kindle could only accept books sold by Amazon. B&N enabled the Nook to accept books borrowed without cost from libraries. Amazon, finally seeing B&N's advantage, is now belatedly opening up Kindles to library books. B&N offered Nooks at cheaper prices while Amazon attempted to use its market dominance to maintain higher prices longer. B&N then used its stores to allow people to try out and learn how to use Nooks before buying, something the store-less Amazon could not offer. For a company that has suffered badly on a competitive basis for the past decade, Barnes & Noble actually made some fairly smart moves.

In a recent story on the Bloomberg website, Value Investment Principals' analyst Sandy Mehta is quoted as saying, "I think this move is about people accessing books online. The bricks and mortar will go by the wayside." A recent article in the New York Times answered the question what Liberty sees in B&N by saying, "It’s the Nook, Barnes & Noble’s e-book reader." If the analysts have it right, Barnes & Noble's salvation may be that it entered, late but smartly, the digital era, not because it is the largest bricks and mortar bookseller with shelves lined with printed books.

While Liberty has made an offer, it is not yet known whether B&N management will accept. B&N officially offered itself up for sale a few months ago to fend off a takeover attempt by dissident shareholders. However, some analysts have speculated that B&N management will demand a higher price, and whether Liberty is willing to go high enough to satisfy them remains to be seen. Also, Liberty's offer is contingent on B&N founder and 30% shareholder Leonard Riggio maintaining his share and retaining a management role with the company.