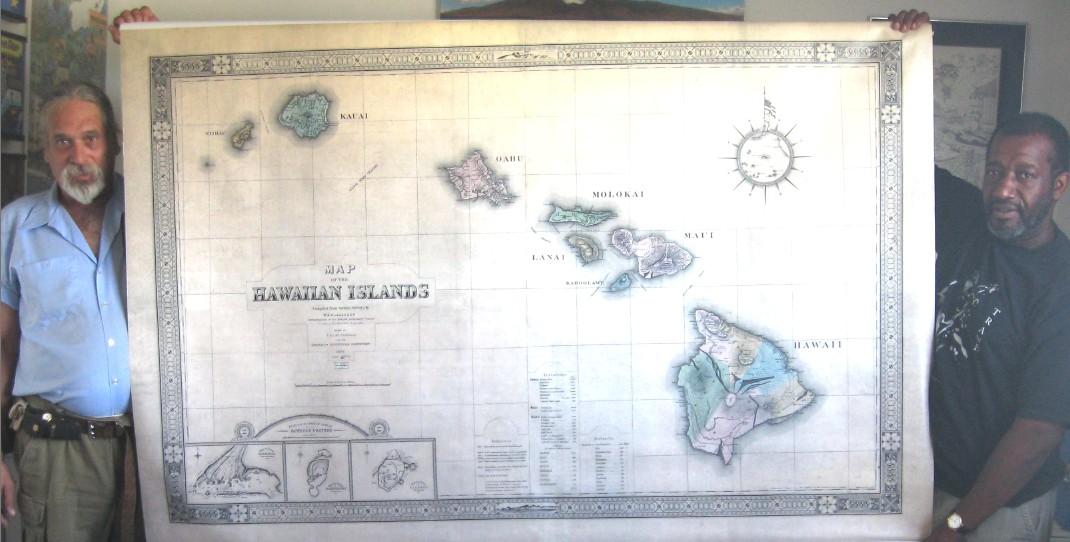 Two Maui entrepreneurs, both with a background in antique maps, are excited about the use of giclee printing for reproducing rare and fragile maps of Hawaii. Bryant Neal and Richard "Buck” Mickelsen are working on a traveling interactive exhibit that interprets the history of the islands through its maps and map makers.

For many years both men worked with Alan Walker of Lahaina Printsellers, another Maui firm that pioneered the giclee process. Recently they joined forces and went out on their own as Tradewind Production Group. They hope to realize their longstanding ambition to use maps to tell the story of Hawaii’s history. What they have in mind is a traveling show where viewers can closely examine documents that they might never otherwise know about or see, because as Neal put it, “in their original state these documents are rare, expensive and fragile.”

Giclee is a form of ink jet printing introduced about a decade ago that has been improved and refined considerably in recent years. Artists were the first to use the process to make high quality limited edition prints. Some in the antiquarian field like Walker, Neal and Mikelsen were also quick to see its potential.  It is a print-on-demand format that can make small high quality editions in a variety of sizes (including extremely large) for a relatively modest cost.

Neal estimated copies cost between 8 to 12 cents an inch depending on whether they’re printed on paper or canvas. With software like Photoshop in combination with their 42” wide Cannon printer they can not only reproduce an image, but also digitally manipulate it, add coloring or other graphic elements, move parts around and print out the results rapidly. “There’s no need to carry an inventory,” he said, “because the work can be printed as needed, as few as one or two at a time”.