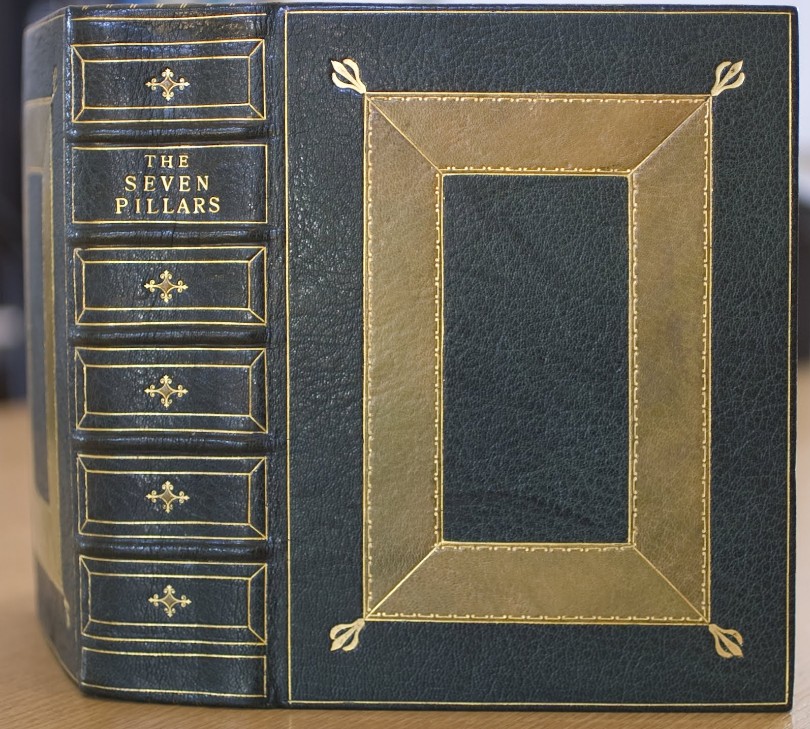 One of 170 subscriber's copies, this one at the Dartmouth College Library.

A census for all copies of the subscribers' edition (1926) of T.E. Lawrence's Seven Pillars of Wisdom is now underway. T.E. Lawrence is better known as Lawrence of Arabia, a British officer who advised and led rebel Arabs against Ottoman Turkish rule during the First World War. The Ottomans were allies of Britain's wartime enemy, Germany, and the British realized that they could force the Turks to deploy significant resources defending their Arabian empire, while the British could take advantage of local Arabs seeking freedom with little cost to their side. The tactic was successful and the Ottomans and their German allies were routed from Arabia.

Lawrence wrote his account a couple of times after the war, losing one draft, tearing up another. A first, private edition was published in 1922, only eight copies in all, and their whereabouts is known. The next edition was this one, published for friends and subscribers in 1926. This, too, was privately published, and not all copies are complete. Lawrence arranged the printing and the binding, which varies from one copy to the next. He used various leading bookbinders of the day. A total of 211 copies were printed, 170 for subscribers, the remainder presentation and incomplete proof copies. Lawrence placed a note at the bottom of the list of illustrations to indicate whether the copy was complete. However, they were not numbered.

The project to account for the copies of this edition goes by the name "Census Project for the Cranwell (also known as the subscribers’) edition of T. E. Lawrence’s Seven Pillars of Wisdom, 1926." The purpose of the census is to try to locate all existing copies of the edition. In addition, the census-takers hope to record notable characteristics of individual copies, such as presentation inscriptions, re-bindings, and provenance. They also wish to hear from people who know about copies that have been lost or destroyed. They are already aware that a copy owned by Sir Ronald Storrs was destroyed by fire, and others may have been lost during the Second World War. Any information anyone can provide about any copies, existing or gone, will be appreciated.

The census is being performed by four individuals. Philip M. O'Brien has published a bibliography of Mr. Lawrence's works. Valerie Thompson is the author of Not a suitable hobby for an airman, a book about this edition of the Seven Pillars. John R. Payne is an appraiser of rare books and archives, who worked with the presidential papers of Richard Nixon. Jack Flavell, formerly with the Bodleian Library, has written several articles on Lawrence.

The project is similar to that of the Darwin Census, begun a few years ago, to try to track down copies of the first edition Origin of Species. That one may be a bit more challenging as 1,250 copies were printed.

So far, the Seven Pillars census has located more than 100 copies of the edition. All information provided to the census-takers will be kept confidential. For those copies in private hands, all ownership information will be kept confidential and not included in their reports unless permission is granted by the owner. Information not of a private nature, or that permitted by owners to be made public, is intended to be published at a future date. Any help with this project you can provide will be greatly appreciated.

Here are contact names, phone numbers, and email addresses to which you may provide information: