Another Act of Hatred in Tucson… At the Library 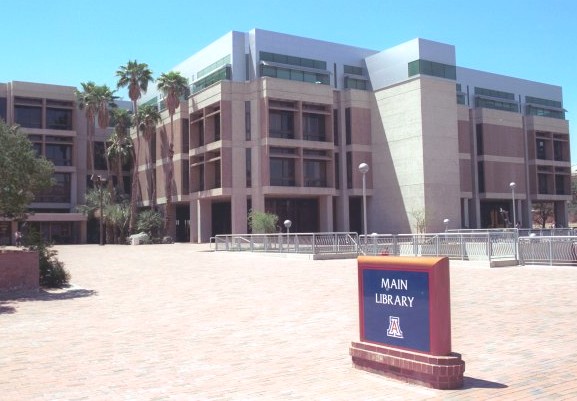 It was a story about some minor vandalism at a library that came out two months ago. It was a local inside-page story for a day, of no consequence to the world beyond the city limits, and not much within them. Fifty-three books were damaged by someone or some group of individuals writing in pen upon their pages. While the library's official fine rate, if the individuals were caught, totaled up to $8,745, it is hard to imagine it would cost the posted rate of $165 per book to replace them.

The story only catches our eye now because of subsequent events. The location was the library at the University of Arizona in Tucson, and as the November 29, 2010, issue of the campus newspaper described it, the "books were tagged with hate speech." As we now know, six weeks later hate morphed from speech to violence just a few miles up the road from the UA Library. This story quickly made front-page headlines all over the world. It left many wondering if there are things that can be done when hatred rears its head, as it did at the UA Library, so it never reaches the level witnessed at the shopping center a few miles to the north.

According to the campus newspaper, a library information associate described the slurs as relating to "religion, race, ethnicity, national origin, sexual orientation and gender." Most specific writings were not mentioned, and those that were need no repetition. It is not known who the writer or writers were, nor exactly when the acts were committed. The vandalized books were scattered throughout the library. The fact that this was a university library suggests that the likely vandals were students or other adults, though this can't be certain. The likelihood that they will be found, unless they commit further acts, seems small. The acts were all committed outside the view of security cameras.

There is not likely any connection between the defaced books at the library and the horrific violence a few miles and a few weeks removed from this incident. Except, perhaps, one. As the local Sheriff, a 75-year-old old-timer lamented, too much anger, hatred, and bigotry have crept into what should be rational discussions about common institutions. When hatred displaces intelligent debate, and personal attacks displace policy arguments, bad things can happen. He noted that Arizona had become something of a "Mecca" for intolerance, and criticized the constant flow of vitriol blasting across the airwaves, that now passes for political discourse. Naturally enough, his comments led to an outpouring of anger and personal attacks directed toward him. His old-time view that our public institutions should be treated with respect, even at times of disagreement, sounded quaint. "Respect" seemingly has become an antiquated word.

There is no direct link between the hate speech written in the library books and this horrific tragedy. That act, as is usually the case, was that of a lone, very disturbed individual. Yet, those who think the old Sheriff delusional for his ramblings should take a look at places where hate speech and incitement to violence is treated as respectable discourse. Political or "religious" leaders in places such as Iraq, Iran, and Pakistan regularly preach such messages, though they do not commit the acts of violence themselves. However, the fact that such messages are treated with anything less than the contempt they deserve allows them to take hold in the minds of the unbalanced and gullible. We would not want to live in these places. What we consider an act of extreme horror has become commonplace there.

We learn from books. Those defaced, hate-filled books in Arizona have something to teach us. Those that sow the wind reap the whirlwind.