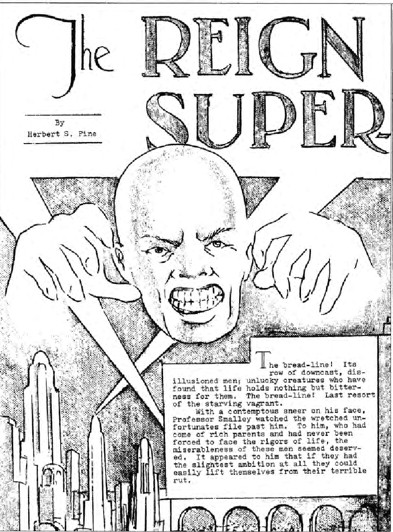 Superman was once a most evil dude.

Another year has come to a close, which means it is once again time for the Americana Exchange's annual review of the highest prices paid at auction for books, manuscripts, and related ephemera. While the market as a whole for books may remain somewhat soft, there is a healthy market at the top, particularly the very top. This past year, eight items exceeded the million-dollar barrier, twice the number as 2009, and the top one sold for over three times the amount of last year's number one. Even in hard times, the old maxim still applies - the rich get richer.

Another positive for the high-end of the market is that #500 sold for $47,806, a healthy sum, and 8.5% higher than a year ago. But, before we enter the AE Top 500, here are a few of the intriguing items that didn't quite make the threshold. An archive including an arrest warrant and commitment decree for Mary Todd Lincoln, Abraham Lincoln's widow, sold for $37,600. They were taken out by her only surviving son, Robert, who believed his mother belonged in an insane asylum. She was committed but later released. For $35,850 you could have obtained an ordinary ship's passport signed by President William Henry Harrison. Why is a document from this obscure president so pricey? The answer is he died only a month into office, and his signature as President is exceedingly rare. For $24,000, you could have obtained three photographic portraits of Alexandra Rhodes Kitchin. She isn't so important, but her photographer, already showing a fascination with young girls, was Charles Lutwidge Dodgson. He would later be far better known as a writer, employing the penname "Lewis Carroll."

#467 is a most interesting letter from British General Burgoyne in 1775, after the British "victory" at Bunker Hill. He warns the recipient not to let this victory get their hopes up, that prospects are "gloomy." He was right. Burgoyne later lost the Battle of Saratoga. $50,000. #412 is a letter requesting provisions for his troops that same year from a loyal American general - Benedict Arnold. Well, at least in 1775 he was a loyal American. $53,125.

#383 is one of the newer items on the list. It is the 1933 mimeograph booklet containing the first story about and illustration of Superman. It precedes Action Comics #1 by 5 years. However, in this story, the caped crusader was a bald villain. He was later converted to a hero for better commercial prospects. $57,500.

#256 is a handwritten, signed entreaty from John Ross, Chief of the Cherokees, to Congress in 1836. Ross pleads that his people be allowed to remain on their ancestral Georgia homeland. "On your kindness, on your humanity, on your compassions, on your benevolence, we rest our hopes. To you, we address our reiterated prayers. Spare our people!" It fell on deaf ears. Two years later, the Cherokee were forced to leave on their "Trail of Tears." $78,000.

#134 is a remarkably frank letter from George Washington to a nephew in 1786, where he explains that should his wife (Martha) outlive him, he would die without issue, and if he outlived her, he would never marry a girl, and a woman of a suitable age would be unlikely to bear him children. $120,750.

"One small step for a man - one giant leap for mankind." These words are inscribed on the flight plan for the Apollo 11 by Neil Armstrong, first man to walk on the moon. #198. $152,000. A century and a half earlier, Lewis and Clark made their comparably spectacular journey for that era. #95 is a first edition of their account. $158,000.

The world was a changin' in 1963 when Bob Dylan penned these manuscript lyrics to The Times They Are A-Changin'. #25. $422,500. Abraham Lincoln was blunt and terse when he sent this telegram to Union commander General George McClellan in 1862:  "You must either attack Richmond, or give up the job and come to the defense of Washington." #20. $482,500. #12 is a document signed by John Hancock, Robert Morris and others in 1776, but it is not their signatures that make it so valuable. It is that of Button Gwinnett, the signer of the Declaration of Independence whose autograph is the rarest and hardest to obtain of all. $722,500.