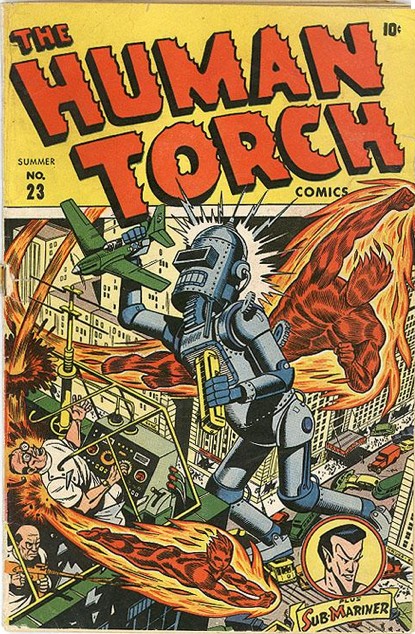 A 1948 Human Torch was among the comics allegedly stolen from Marciniak.

A book theft that turned deadly may lead to homicide charges depending on the outcome of forensic evidence. The books at issue were actually comic books, but the results were nothing short of tragic.

On July 5, thieves broke into the home of 77-year-old Homer Marciniak of Medina, New York (near Buffalo). Evidence indicated that Marciniak was beaten during the theft of his comic collection. He had been collecting the comics, some dating back to the 1940s, since he was a boy. The collection has been valued at 40,000-$100,000. Marciniak was briefly hospitalized after the attack for cuts and bruises. Several hours later, he suffered a heart attack and died.

It took a couple of months for police to make an arrest, but when they did, they charged Rico Vendetti, 41, a Rochester businessman, and 17-year-old Juan Javier, with burglary. The case, however, is rapidly expanding. Four others are now allegedly involved and some may be cooperating. Meanwhile, Vendetti has been charged under racketeering statutes with operating a crime ring. Allegations are that he has been purchasing stolen merchandise from thieves and shoplifters for years, taking in around $50,000 a month in sales. The primary venue for his sales is said to be eBay. He allegedly has been selling everything from razor blades to Rogaine this way. In the Marciniak case, the FBI believes he recruited the individuals to break into the older man's home to steal his comic collection. The charges claim that Vendetti has put several comic books from Marciniak's collection up for sale online.

While the charges against Vendetti and the others are already serious enough, the FBI is looking at an additional charge - homicide. The time between the robbery and Marciniak's death was approximately 10 hours. However, there are tests that can be made on blood samples to determine whether the heart attack began at the time of the crime. Samples from the crime scene have been submitted to a laboratory to perform the requisite examination. Obviously, there is great suspicion that the timing of the assault and terror Marciniak experienced and his death by heart attack is more than an unfortunate coincidence. The question is whether a clear link can be established forensically. If so, one can expect that Vendetti and his alleged cohorts will find themselves in far deeper trouble. Fatally attacking an elderly man is not the type of behavior likely to elicit sympathy from a jury.