The Collector Becomes a Seller 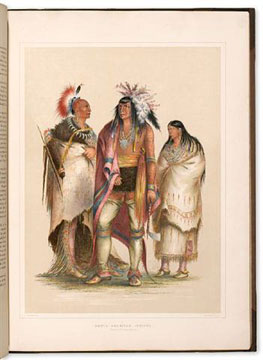 Expedition under the Command of Captains Lewis and Clark

On December 2nd, at Bonham's in New York, material long prized goes to auction. This is my second auction in as many years of important personal book collections. This next sale is The American Experience: 1630 - 1890, 340 items relating to the colonization of North America, the emergence of the American colonies, the forming of the United States and the opening of the west. In the November issue of AE Monthly I'll write about the collection. This month I'm writing about its origins and providing an overview.

The impetus to collect may spring to life full grown or develop from ideas and memories planted decades earlier. There is no right or wrong about this. Collections, mine included, are to a great extent simply ideas that take physical form; the why we want and even what we want often beyond our understanding. Such collections, although logical, invariably have emotional roots that are difficult to explain but important to understand. In the book business obsessed collectors are an important element in the field and if anything I say can further illuminate the path to or for them this exercise in explanation is well worth the effort.

Not surprisingly, collectors, while deeply involved in their subjects, can often better explain the what than the why of their collecting. And because collecting has an emotional basis, as collectors change, so too do their collections. This is the reason I'm now selling. My focus, once the broad American perspective, is now finely focused on the Hudson River valley and the State of New York. In the fourth quarter of my life I'm now able to collect that which I first pursed with only limited success when young.

For me collecting has always had an internal logic. In my early life too much was in motion. In history I found stability and in time began to collect evidence of its constant change. If the rest of life was less certain the durability of changing historical perspective provided a mountain top view that made other change relative and understandable. It was a great and early discovery and became an enduring part of my life. In this way I found my way to books, and books a place in my life.

This collecting is of course endlessly complex. There is no one way nor even any right way to do it, every direction taken a unique combination of interest, opportunity and capability. But if the how and why of collecting is complicated the dispersal of collections is something different altogether. We collectors reach the decision to disperse by many routes but eventually discover that we all exit more or less together: bequeathing, ignoring or selling; the paths to outright sale as narrow as the paths to acquisition are broad. Sell it yourself, sell to dealers or consign to auction.